Local residents who will be out of town or think they may be too busy to vote on election day, 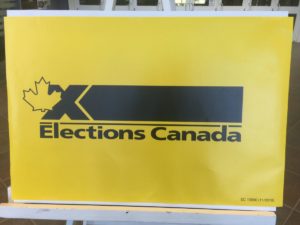 can cast their ballot this weekend.

Advance polls will be open from 9 a.m. to 9 p.m. today, tomorrow, Sunday and Monday. You can find the address of your polling station on the back of the voter information card, by visiting the Elections Canada website or calling 1-800-463-6868.

To vote you will have to bring identification with you, such as a drivers’ license. A complete list of acceptable ID can be found on the Elections Canada web site.

In both local constituencies, seven candidates will be on the ballot.

In Cape Breton-Canso, the candidates are Liberal Mike Kelloway, Alfie MacLeod of the Conservatives, the NDP’s Laurie Suitor, Clive Doucet of the Green Party, Billy Joyce of the People’s Party of Canada, Darlene Lynn Leblanc of the National Citizens Alliance of Canada and Independent candidate Michelle Dockrill.