With the completion of Appleseed Court, the Antigonish Affordable Housing Society is now 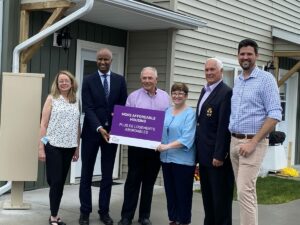 exploring it’s next potential project.  A ceremony to mark the end of construction of the 12 unit affordable housing complex was held last week.

Society chair Rachel MacFarlane says the board has held strategic meetings to discuss plans for next steps.

MacFarlane says the society recognizes there is a need for more affordable housing units.  She says it received about 70 applications for the 12 units at Appleseed Court.  More enquiries came in after the deadline closed and again after the last week’s ceremony.

MacFarlane says under the National Housing Strategy there is funding available in the form of loans and grants to build more affordable units from the federal and provincial governments.  She says municipal governments are also on board to help.