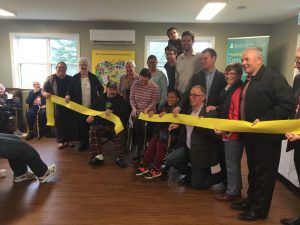 opened over the weekend. A ribbon cutting ceremony was held in the facility’s community room to celebrate the opening of 10 new affordable rental units.  One of the new tenants is Colleen Bulger, who says there’s a marked difference living in Riverside Estates than her former residence.

Another new tenant to Riverside Estates is Doreen Grant says she is very pleased with her new apartment.

Society Chair Colleen Cameron says it’s an exciting day to reach this point, to have tenants who have never lived in a new building before. Cameron in the coming months it will continue to fund-raise to cover the cost of the project.

However, Cameron says it’s also looking to potential opportunities in the future.

The first phase of Riverside Estates, containing four units opened in March of last year.  The 14 units on Hope Lane, are home to 25 people, ranging in age from 4 to 74.  Five residents are children, six are living with disabilities and three homes are led by female single parents.