The county is keeping the court house. 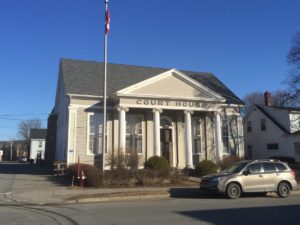 amendments to the lease between the province and the county regarding the Antigonish Court House. County Warden Owen McCarron said the province stepped up in a meaningful way, noting in addition to an increase in rent, the province offered an increase to an allotment of money earmarked for necessary capital improvements for the court house.

After council reviewed the province’s offer as well as last month’s presentation from the Antigonish Barrister’s Association, McCarron said council is comfortable sticking with the remaining four or so years of the lease with the province.

When asked about how the lease amendments came about, McCarron explained the barrister’s society also spoke with the attorney general about their concerns. As a result, said McCarron, the province realized they didn’t want to lose the facility.

McCarron said the county received a number of inquiries and one bid for the courthouse during the request for proposals period. The cost to operate the courthouse in a bare-bones fashion was around $28,000.