An Antigonish man has raised $1,500 for CACL Antigonish through long-distance cycling.  Just 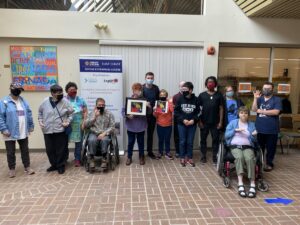 Connor Fraser (Center, back row) celebrates with CACL participants on raising $1,500 for the social enterprise. In the photo is a picture of Fraser and his parents following this rider earlier this month. (Ken Kingston photo)

over a week ago, Connor Fraser took his bike and cycled from Meat Cove to Antigonish, a distance of 300 kilometres.  Fraser says it took him 13 hours to complete the feat; 12 hours of ride time.  Fraser says road cycling is a rather new hobby for him, and over the spring and summer he has been increasing his distances.  As the end of the season approached, Fraser says he wanted to see what his limits might be.

Fraser says he raised the money through social media, mostly Facebook and Instagram.  He updated followers on his training,  how his ride for CACL could be supported, how much he has raised and what his goal was.  He says his friends and followers were very supportive.