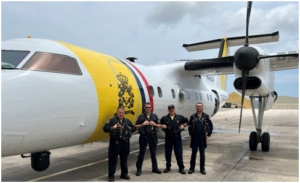 On May 27, Curacao Rescue Coordination Centre received a report of a distress call from a tanker, with the vessel sinking and crew abandoning ship. Smith was piloting a Dash-8 MP aircraft which was dispatched to help recover survivors. After spotting people in the water, they alerted the survivors by flying overhead with lights on but the decision to drop rafts was delayed due to not wanting to drop flares in dark because of the presence of oil. Two vessels, the UBC Stavanger, and MV Melba were directed to the scene.

At daylight, they were able to drop rafts without smoke markers and two groups of survivors were picked up by the two vessels. In total, 14 people were pulled out of the water.

Smith said this was the biggest search and rescue of which he’s been a part.