Last night, Antigonish Town Council defeated a motion to hold a plebiscite regarding the proposed consolidation of the town and county of Antigonish. The vote was 5-2, with Mayor 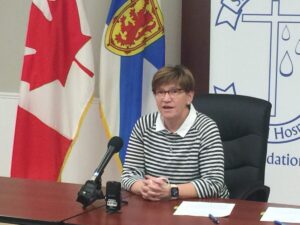 Laurie Boucher, deputy Mayor William Cormier, and councillors Mary Farrell and Andrew Murray voting against the plebiscite. Councillor Donnie MacInnis said he planned to abstain from the vote but upon hearing he had to vote, went against the plebiscite. With the motion being defeated at the council table, it cannot come before council again. Councillors Diane Roberts and Sean Cameron voted for a plebiscite

Following the meeting, Boucher said the idea of a plebiscite came up during the beginning of the consolidation process. She said it was decided at the time that the councils would take their current route and a plebiscite would not be included.

Roberts brought the motion to hold a plebiscite forward. Following the meeting, she said she raised it because of the number of town and county residents expressing concern with the consolidation process and asking for a public vote. She also said she spoke with Deputy Mayor William Cormier, noting the both agreed she should bring it forward.

When asked about the result, Roberts said she wasn’t surprised.

When asked if she feels the motion was presented too soon, Roberts said the exploration process is almost over, asking what other information people need.

As for the presentations from town residents on the consolidation, Boucher said both were well done and thought out, noting council will review them, and get back to both individuals with responses to questions.

When asked about a timeline, Boucher said they are waiting on correspondence from the RCMP regarding policing costs. As for right now, when the public sessions wrap up, the consultants will put together a final report, and provide it to both councils. Boucher said the councils will review the report, noting it will also be made public. With that said, she did not rule out a possible vote on consolidation this summer.