Preparations are underway for the Sisters of St. Martha to move to their new home, from the Bethany Motherhouse to the Shannex complex next door.  The Sisters held their 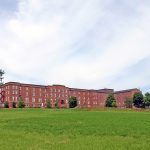 final public mass in the chapel earlier this month; it’s estimated some 300 attended.

Congregation Leader Sister Brendalee Boisvert says there was one final gathering of the Sisters in the chapel before it was closed.  The service was conducted by Bishop Brian Dunn.
Until they move, the Sisters will celebrate Mass at the Assembly Hall in the Motherhouse.  When the Sisters do move to their new home in March, they will bring symbols of their old chapel with them; eight stain glass windows depicting eight female Saints