Frankville, Antigonish County native Dennis Bonvie has been inducted into the Luzerne County Sports Hall of Fame in Luzerne, Pennsylvania.  Bonvie was a 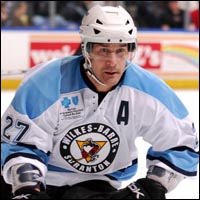 member of the American Hockey League’s Wilkes-Barre/Scranton Penguins and was named to the team’s Hall of Fame in the 2013-2014 season.  Bonvie suited up for eight AHL and six NHL teams during his career.  He retired from professional hockey in 2008.  He’s now a scout for the NHL’s Boston Bruins.