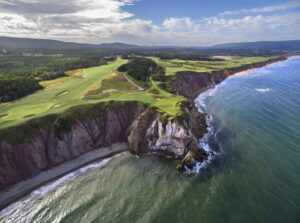 Golfer Marlene Stewart Streit. Stewart Streit Way, on the Cabot Cliffs portion of the resort pays tribute to one of the most decorated Canadian golfers in history. Born in 1934 in Cereal, Alberta, Streit captured the Australian, British, Canadian and US Women’s Amateurs, the only golfer to achieve such a feat. She was inducted into the World Golf Hall of Fame in 2004 and the Order of Ontario in 2006.

Streit was one of the first golfers to play Cabot Cliffs when it opened and also carded a 74 at Cabot Links.

Cabot Cape Breton says in addition to celebrating Streit’s contributions to the game, it is committed to making golf more inclusive and accessible to diverse groups of all skill levels through programs such as its Women’s Golf Day Event this year.