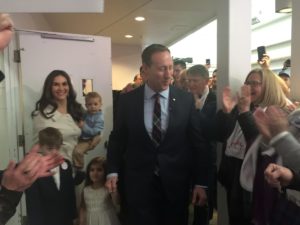 MacKay to run in Central Nova in the next federal election.

During a regular meeting of the association’s Board of Directors on Saturday, MacKay was invited to participate in the regularly scheduled meeting to update members by phone. Due to being under quarantine, he could not attend in person. MacKay stated he moved home to New Glasgow. When asked if he would run in the next election, he said that all cards are on the table but it would ultimately be a decision he would make with his family.

As an MP, MacKay won Central Nova six consecutive times. In the recent leadership election, MacKay won 92 per cent of the vote in Central Nova, the highest margin of victory recorded in an individual riding in Canada. The Central Nova Conservative Riding Association fully supports a Peter MacKay candidacy in the next election and highly encourages him to seek the nomination.

Under the new nomination framework outlined in Erin O’Toole’s platform, which recognizes that local riding associations can now open the nomination when desired instead of waiting for a date from Ottawa, the Central Nova Riding Association would move to quickly open the nomination so MacKay, if he decides, could start campaigning as the official candidate as soon as possible.