Central Nova MP Sean Fraser is receiving some national recognition from a well-known news magazine.
Maclean’s has announced winners of its Parliamentarians of the Year Awards.  Fraser was 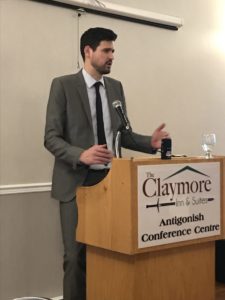 named the Best Orator. The awards are voted on by fellow MP’s in the House of the Commons.

In accepting the award, Fraser says public speaking is one of his  favourite parts of the job; to take questions during Question Period, as well as participating in debates.
Fraser says debating issues has been a part of his life since childhood, growing up in Merigomish.
Fraser was one of two Atlantic Canadian MP’s to be honoured.  The other is Fredericton area MP Jenica Atwin from the Green party, winner of the Rising Star Award.  Former Green Party Leader Elizabeth May, who has ties to Northeastern Nova Scotia was named Most Knowledgeable MP.