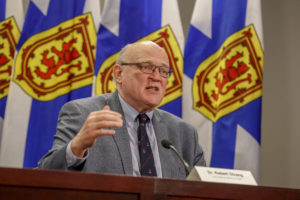 Dr. Robert Strang said while people may be concerned the case numbers have increased with around 30 a day announced the past week, there is some good news.

With the province testing 800 to 1000 people a day, the percentage of positive tests is low and the number of positive test per day has not continued to climb.
While Strang says the current health measures are working, it’s too early to relax. He said the province has a few tough weeks ahead where people have to remain vigilant and keep each other safe. He also said they could be in a position, possibly within a few weeks, where the province can begin looking at how they can slowly relax some of the restrictions.
The province announced 29 new cases of COVID-19 today, bringing the provincial total to 474. Nine individuals are in hospital, four of those in ICU.
The province also announced a man in his 80’s died from complications related to COVID-19.  That’s the province’s third death from the virus