St. FX University students have a new learning space on campus.  Classes have begun in 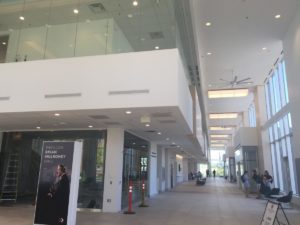 At the entrance of Mulroney Hall

Mulroney Hall, which replaces Nicholson Hall.  The University’s Vice President of Finance and Administration, Andrew Beckett, says the facility is more flexible than its predecessor, which housed 23 classrooms.

The building will also house several exhibits of former Prime Minister and St. FX graduate Brian Mulroney, including a re-creation of the Prime Minister’s office.  There’s also been a complete renovation of Nicholson Tower.  Mulroney Hall will be officially opened later this month.