Climate change is real and as a result, we are seeing the risks of extreme weather, including 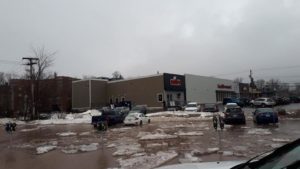 Town of Antigonish Photo from  flooding in February of this year

more frequent flooding.  That will be the message in tonight’s keynote address to open Climate and Democracy Week  at St. FX University by Dr. Blair Feltmate, chair the Federal Government’s Expert Panel on Climate Adaptation and Resilience Results.  Feltmate, who is also head of the Intact Centre on Climate Adaption at the University of Waterloo calls his  talk “Hotter, Wetter, Wilder; is Canada Moving Fast Enough to Keep up with a Changing Climate”.

Feltmate says one of the risks of climate change is the increased chance of flooding.  He says there are ways homeowners can minimize the risk to their properties.
Feltmate says also ensure the grading of your property directs water away from the foundation. As well, check that your sump pump is working property and have a battery back up supply or a generator to run the sump pump if there’s a power outage.
Feltmate will also touch on other impacts of climate change, including the fire risk to communities near forests and extreme heat.  Feltmate’s address will be at 7 at the Schwartz Auditorim following the opening ceremony at 6:30 where the University, Antigonish Town, Antigonish County and Paqtnkek will announce the launching of a Climate Strategy Working Group.