It was a great weekend for athletes from Antigonish, Guysborough, Inverness and Richmond 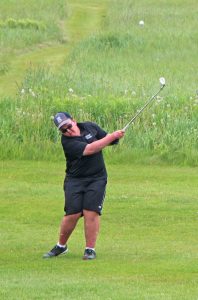 Ryan Kearney, a gold medalist at the Special Olympics Provincial Games in Wolfville

Counties at the Special Olympics Provincial Summer Games in Wolfville.

The Regional Coordinator for Eastern Highlands Special Olympics, Joan Conrad, says its track and field team had another strong outing, with all its athletes capturing at least one medal.  They were led with stellar performances by veterans Kristina Richard, Sasha Repko, R-J Pitts and Christian Gero.
Swimmers Jessica Gillis, Elizabeth Abler and Alex Dearden picked up multiple medals, golfers Theresa Borden and Ryan Kearney won gold at the games and 5 of the 10 Bocce athletes had medals at the games.
Conrad says she’s happy with the results.
Conrad say its Soccer team played well in a higher division this year.  They finished fourth, losing in the bronze medal match.