The Gaelic College is getting a new campus thanks to some help from the federal government. 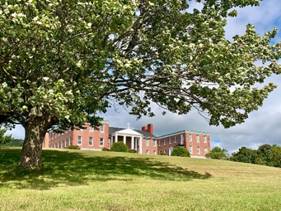 to renovate the former St. Joseph’s Convent and Renewal Centre into a satellite campus which will be called Mabou Hill College.

Kelloway made the announcement on behalf of the Mélanie Joly, Minister of Economic Development and Official Languages and Minister responsible for ACOA. Renovations to the 32,000 square foot former St. Joseph’s Convent and Renewal Centre in Mabou began in June and include green technology upgrades such as solar panels and heat pumps. The improvements are expected to be completed by the end of 2021. The project will create 17 full-time jobs.

The campus expects to offer Gaelic culture and event management courses classes in September 2022 and is looking to welcome 35- live-in students. From May to August, the campus will also provide accommodations for seasonal staff in Mabou and Inverness County.

In March, the province announced a $1.92 million commitment to renovate the building