A classic in fantasy literature is now an outdoor theatre experience. 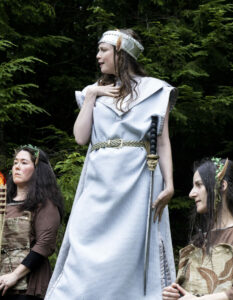 Keppoch Mountain. Shows are running at 6:30 p.m. this weekend, 6:15 August 9-14, and 6 p.m. from August 16-18. The opening performance is schedule for Saturday night, after being cancelled Thursday and Friday evenings because of the extreme heat.

Festival Antigonish Summer Theatre managing director Reema Fuller said the production expands on work done last year with Robin Hood The Great Escape. For that play, the crowd was divided into groups of 20 and were taken to separate stages along a Keppoch Mountain trail. For The Hobbit, the crowd will stay together in one group of 100 and move to the staging areas together.

Fuller said organizers are blown away by the support the show received so far, noting they are technically sold out. She did say there are sometimes spots that come up if people can’t make it, and they also have three dates on hold at the end of the run that they haven’t yet sold for tickets in case something like a rain cancellation pops up. While there is some availability, they also have a long wait list as well. For those who haven’t had a chance to get tickets and are still interested in the show, Fuller suggested volunteering as an usher.

Fuller thanked everyone involved in the production, the sponsors, 989xfm, the Town and County of Antigonish, and other government partners.