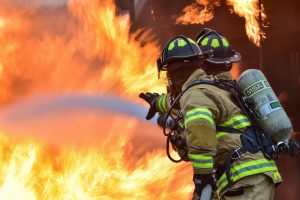 months-long Fire Review study, commissioned to look at the county’s volunteer fire departments. Two motions were brought to the floor: the hiring of a fire co-ordinator by the county to help the various departments with tasks such as training programs, procurement, and records management; and a funding formula called the “Abercrombie Proposal”, which would see the 12 larger fire departments contribute five percent of their budgets to an equalization fund, which would go towards the five smaller departments that are struggling to fund their services.

There was much debate, as several councilors noted that few of the fire chiefs were in favour of council bringing in a plan to redistribute funds, and that bringing in a co-ordinator would be seen as meddling in the operations of the departments. Councillors in favour made the case that a co-ordinator could help fire chiefs with tasks outside of firefighting, and could help bring about cost savings. Councillor Robert Parker noted that the funding issue has been in front of council for years, and there is no more time for delays.

The biggest objection to the Ambercrombie Proposal was that under municipal rules, fire rates and funding can’t be changed without a public meeting of affected ratepayers, which haven’t been taking place due to COVID-19 restrictions. A motion to table the vote until such gatherings could take place was defeated.

In the end, the Abercrombie Proposal and the motion to hire a fire co-ordinator both passed.