Lane Hall is set to come down.

StFX VP of finance, Andrew Beckett, said work is already underway on the interior of the 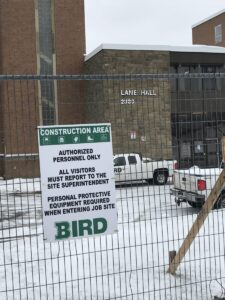 Exterior or Lane Hall as it is being prepared for demolition

building, which was completed in the fall of 1968. The building itself is scheduled for demolition in the spring. Beckett said he expects the site will be cleared in the summer, possibly in September.

He said the hope is to have the fundraising complete in the next year to 18 months.

Beckett said recognizing the legacy of Lane Hall and its namesake, Francis E Lane, a successful businessperson and X grad, is an active part of the considerations with the new building.