A former standout with the St. FX Hockey X-Men has been named the U Sports Men’s Hockey 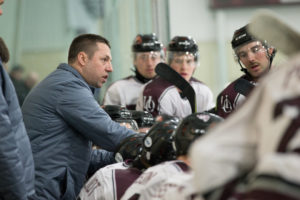 Coach of the Year. Patrick Grandmaitre has been head coach of the Ottawa Gee-Gees for the past three seasons, and the program has steadily improved under his leadership.. He led Ottawa to a 22-2-1-and-3 season this year. The team was fourth in the nation in goalds per game and fifth in goals against. Grandmaitre received the Father George Kehoe Memorial Award at the national awards gala in Lethbridge, Alberta last night. The X-Men open the U Sports National Men’s Hockey Championship tomorrow night against Queen’s.