A skatepark is coming. 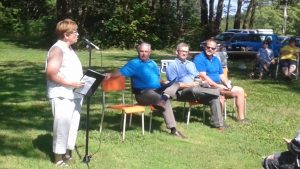 Antigonish Skate Park Collective and the town and county of Antigonish for the space located near the former Antigonish County Municipal building. Antigonish Mayor Laurie Boucher said they have been looking for a possible location for a skatepark for some time.

Boucher said the lease agreement is for 19 years.

While the design of the park is still up the air, Boucher said they want the skate park to be a mark of pride for the community and the university. The town and community have committed to making the sure the project comes to fruition but haven’t committed to funding amounts at the moment.

The next step in the project is fund raising, with the estimated cost of the facility at around $700,000. An anonymous donor already offered $200,000 in funding. The plan now is for both community fundraising, as well as petition the levels of government and corporate sponsors.

The Skatepark Collective’s Matt Schumacher said they kicked off their fundraising with a barbeque by donation during the announcement. In the next couple of weeks, he said, they will send things out to the community about how they can get involved.

As for what the park will look like, Schumacher said they will consult the community. He said they foresee a green space, the concrete area for the park, and a seating area.