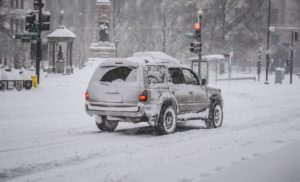 Yesterday in a Special Weather Statement, Environment Canada suggested the storm could bring 10 15 centimetres of snow with strong winds to the province.

This morning, the national weather forecaster has issued a new Special Weather Statement for Lunenburg, Queens, Shelburne, Yarmouth and Digby counties. For those areas in western Nova Scotia, 5 to 10 centimetres of the white stuff is likely tomorrow, perhaps 15 centimetres for some areas. Lesser amounts of snow are expected for the rest of Nova Scotia. This storm will be more out to see than originally expected, and will skirt the Atlantic coast before moving away on Friday.

However, Environment Canada is warning of strong winds for Antigonish, Inverness and Victoria Counties Thursday night into Friday. That could result in high winds and storm surge in the southern Gulf of St. Lawrence and Cape Breton. Maximum wind gusts could exceed 90 kilometres an hour.