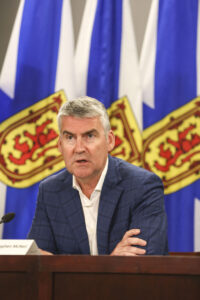 will treat Premier Stephen McNeil’s stewardship of the province as a great legacy.  McNeil announced yesterday he will be stepping down as party leader and premier once a successor is chosen.

Khoury says under McNeil’s leadership, the government created unprecedented economic growth, which resulted in an increase in the province’s population and a return many of our young people back to Nova Scotia.  Khoury says McNeil also guided the province through one its most difficult global challenges, COVID-19 with compassion and a focus on keeping Nova Scotians safe.
Khoury says McNeil also dealt with a number of other issues.
Khoury says the Liberal Party’s provincial board has a month to meet and decide on the type of leadership convention they want and a timeframe.  Under the party constitution, it has 18 months to select a leader, but Khoury expects it will happen before that