The Canso Lions Club was a big part of a recent donation to the Eastern Memorial Hospital. The Local Lions as well as the Lions Club International Fund offered $37,740 for a new ultrasound 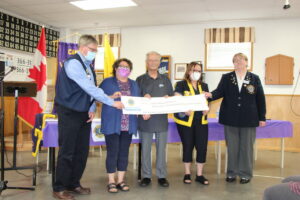 Canso Lions Club member Ray White said the Ultrasound system itself cost around $54,000. The Canso Lions made an application to the Lions Club International Fund, in partnership with the Antigonish Lions Club and they were told the community had to raise half of the funds. To start that campaign, the Canso club donated $10,000. The community did their part in fund raising and the LCIF approved its funding of $27,740.

White said he also understands the new system will help make the hospital more attractive when it comes to recruiting doctors, as well as help the current doctors provide better diagnostic care.