The Pictou Antigonish Regional Library is hosting a meeting next week to unveil plans for a new library.

Earlier this week, council for the Municipality of the County of Pictou committed $275,000 for 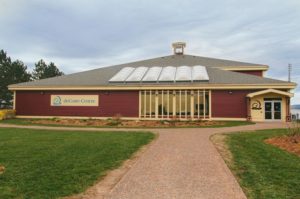 the Pictou Library Project. Eric Stackhouse, chief librarian with PARL, said the Town of Pictou also confirmed a similar amount of funding for the project, which he said will create a new cultural hub for the area.

Stackhouse said the project was three years in the making. The plan is for the new library to be integrated into the DeCoste Performing Arts Centre. Stackhouse said staff will share the conceptual and business plans for the facility at a public meeting on October 16 at 7 p.m. at the DeCoste Centre.

Stackhouse said PARL will install a link on its Web site which will feature the plans after the meeting.

X-Women Hockey Hold on to their #7 National Ranking

The St. FX Hockey X-Women remain in the top 10. The weekly university varsity school rankings were announced yesterday by U Sports. The X-Women held on to it’s 7th place seeding from last week. The X-Women begin their quest for an AUS title this weekend, with game one of their semi-final at home Saturday evening […]