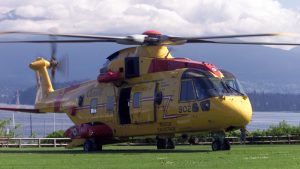 Cormorant Helicopters during a training exercise in Canso.

On July 13th, 2006, the Cormorant’s seven member crew were practicing in night boat hoisting from a fishing vessel, Four Sisters, a Coast Guard Auxiliary Vessel. At around 12:30 a.m. during an attempted go-around from an approach to the fishing vessel, the helicopter hit the water. Three pilots and the Search and Rescue Technician team lead were injured, but survived. Two flight Engineeers and a Search and Rescue technician were not able to get out of the aircraft and died.

Today, a Hercules aircraft and a Cormorant Helicopter will be conducting standard training in the area. The Cormorant will later land, with the air crew the squadron commanding officer and the chief warrant officer will participate in a memorial service. The service will begin at the Canso Harbour Cormorant memorial at 12 noon today, which includes a moment of silence.