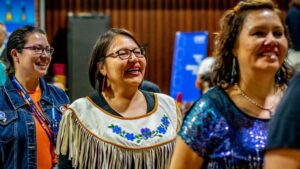 fund-raising campaign at the Coady Institute to support Indigenous Women’s Leadership programming
Ryan Reynolds and his wife Blake Lively are donating $200,000 to the campaign called the Circle of Abundance.
The Director of the Coady’s International Centre for Women’s Leadership Eileen Alma, says the institute is building on a decade of Indigenous Women’s Leadership programming.  Alma says the Coady wants to enhance that with this campaign.
Reynolds and Lively, who have donated to a number of causes in recent months,  are encouraging others to support the campaign.  Alma says she’s excited because it’s already inquiries and interest from the public to its fund-raising drive.