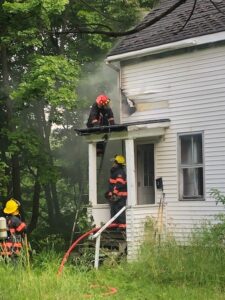 New Glasgow Regional Police photo of a fire last week on MacKay Street New Glasgow.  It is one of the vacant residences where the 41-year-old female was charged in connection with.

connection with several suspicious fires in the area over the past year and a half.  Police say the woman has been charged with seven counts of Arson, two counts of Arson-Disregard for Human Life and three counts of Mischief.

Police say the suspicious fires occurred between January 5th of last year to July 7th of this year in the towns of New Glasgow and Trenton involving five vacant residences, two occupied dwellings, one involving a business and three cases involving property.  There were a total of ten separate investigations by police.

The person charged in the case has been remanded into custody and will be appearing in Provincial Court in Pictou today.

Police are continuing their investigation.  Anyone with information related to these incidents can contact the New Glasgow Regional Police at 902-752-1941.  Should you wish to remain anonymous, call Nova Scotia Crime Stoppers at 1-800-222-TIPS, submit  a secure web tip at www.crimestoppers.ns.ca or use the P3 Tips App.