A mural depicting the Antigonish Landing is the latest addition to the town’s landscape. 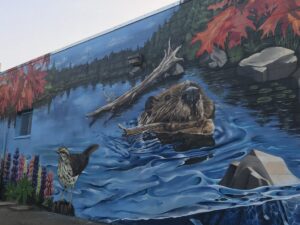 Emma MacDonald, director for the Antigonight Art After Dark festival, said the mural project is part of the festival, which ran from September 1st to 12th with some bonus online events happening this week. She said they contacted Michael Burt, an Antigonight alum with Trackside Studios, about the project. With the artist confirmed, organizers then spoke with the Jewkes family about placing the mural on the side of the 5 to Dollar store. Work on the mural began last week with Burt and his team coming to town.

MacDonald said the Antigonish Landing is an important part of the community. Organizers spoke with members of the StFX biology department for help with identifying wildlife to include in the painting.

She said she hopes this is a start to adding more murals in the area.