During a COVID-19 update today, Premier Stephen McNeil thanked residents for keeping the 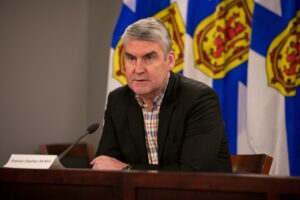 numbers low while announcing they are tightening up their border with New Brunswick. The announcement comes as numbers continue to rise in New Brunswick, with McNeil noting the Nova Scotia’s neighbor is experiencing an outbreak with cases across the province.

McNeil said the Nova Scotia government will remain in touch with their New Brunswick counterparts, and monitor numbers in both provinces to determine when they can lift the restriction. McNeil also said most current restrictions will remain in place for at least another two weeks.

Permanent residents of Prince Edward Island and Newfoundland and Labrador do not have to isolate if they drive straight through New Brunswick to Nova Scotia with no or minimal stops.