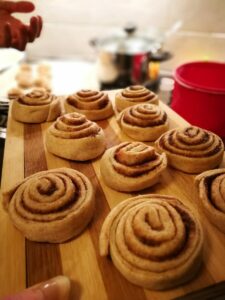 sharing her recipes on social media is now an author.  Mary Janet MacDonald has written a cookbook called “Tunes and Wooden Spoons; Recipes from a Cape Breton Kitchen”.

MacDonald’s success began very modestly, she was encouraged by  her daughter in Fort McMurray to share a cinnamon roll recipe via a live feed on Facebook. The video went viral, which led to the creation of her Facebook page “Tunes and Wooden Spoons” which now has more than 50,000 followers.  MacDonald shares a new recipe every Sunday, live from her kitchen.

MacDonald says she was encouraged to develop a cookbook through her followers on Facebook.

MacDonald says there are more than 100 recipes, many of them passed down from her family. The cookbook, printed by MacIntyre Purcell Publishing of Lunenburg, will be available September first at major book stores and on Amazon.