Nova Scotia is going into a province-wide shutdown to limit the spread of COVID-19, as Nova 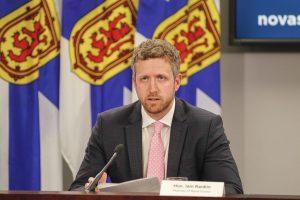 Scotia posted a record 96 new cases of the virus.  A lockdown was already imposed in the Central Zone, but Premier Iain Rankin says COVID numbers continue to climb.  Rankin says while the majority of the cases are in the Central Zone, they are beginning to see a disturbing trend in the Cape Breton Regional Municipality.  He says there is increasing concern of community spread in the CBRM.  Rankin says COVID is in every region of the province with no sign that it is slowing down. He says that’s why the province has to act.

Rankin says the province-wide shutdown will come into effect at 8 a.m. Wednesday and will remain in effect until at least May 12th

Rankin says long-term care homes will be closed except to designated caregivers.  Essential services, such as doctors and dentists offices, grocery stores and pharmacies can open at 25 per cent capacity. Outdoor businesses such as construction companies can remain operating as they continue to follow public health protocols.  Also remaining open at outdoor parks, golf courses, and tennis courts, as long they follow public health protocols.  Day cares will remain open, with the focus on providing service to those providing essential or have no other child-care option.

Nova Scotians can only gather indoors and outdoors with their household bubble.  Households of two or less people can socialize with one or two others, but they must be the same two people for the two week person.  There’s also no unnecessary travel between communities.  A community is defined as the municipality where you live.