The premier burst the family bubble.

During an announcement today, Premier Stephen McNeil announced an easing of COVID-19 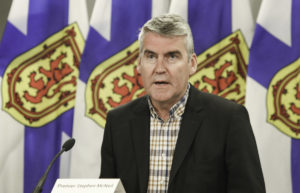 With summer arriving this weekend, the premier also acknowledged how important it is for kids to be outside. Effective today, playgrounds can reopen but municipalities and other playground owners will need time to prepare them for reopening so Nova Scotians should not expect them to open immediately.

Cases of covid 19 in the province are down but until there is a vaccine, said McNeil, we need to learn to live with the virus. McNeil and chief medical health officer Dr. Robert Strang are discussing the proposed Atlantic bubble with their colleagues. The Atlantic bubble would be the first step, he said, with the second step being the eventual opening up to the rest of Canada.