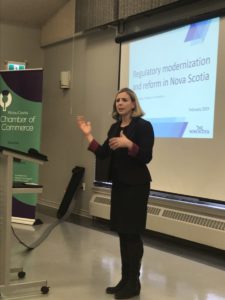 trimming interprovincial trade barriers in the region presents an opportunity.  The Executive Director of Regulatory Reform and Partnerships with the Office of Regulatory Affairs and Service Effectiveness, Leanne Hachey spoke to the Pictou County Chamber of Commerce this morning.

Hachey says this region has more to gain than any other part of the country by eliminating barriers to trade; regulations that vary from province to province
Hachey says the Atlantic Provinces Economic Council has suggested several areas where regulations in the region could be more universal, including trucking, labour standards, safety standards, procurement and labour mobility.  Hachey says the four provinces are discussing some of these issues now.