Nova Scotians will be going to the polls in a provincial election.  Premier Iain Rankin visited 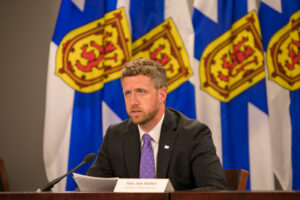 Lieutenant-Governor Arthur LeBlanc this morning to dissolve the legislature.  Rankin says the province’s general election will be held on August 17th.

Rankin has been premier for less than five months, succeeding Premier Stephen McNeil.

At dissolution, the Liberals held 24 of the legislature’s 51 seats.  The Progressive Conservatives, led by Pictou County’s Tim Houston had 17 seats, while the NDP under Gary Burrill had five seats.  There were also three independent seats and two vacancies.