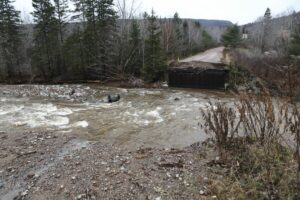 On Oregon Road in Victoria County where a bridge was washed away by the storm. (Communications Nova Scotia photo)

Jamie Chisholm, eastern district director for the department, said infrastructure in the local area saw significant damages with roads being washed out in Antigonish and other areas, while Inverness and North Victoria lost a few bridges. He said they had crews out all night, and as of Tuesday they were working on assessments now the water level is dropping some. Chisholm said they expect to find some issues that weren`t evident earlier, with repairs to follow.

A release from the department yesterday stated the rainstorm resulted in the closure of more than 25 roads in eastern Nova Scotia and Cape Breton, with washouts on the Cabot Trail, as well as some roads in northern Nova Scotia, with Victoria, Antigonish and Inverness counties hit hardest.

Chisholm said if residents notice any issues they are asked to contact 1-844-696-7737 and monitor 511.novascotia.ca before they hit the road.