It was an historic moment in Antigonish.  For the first time ever, the Rainbow Flag has been 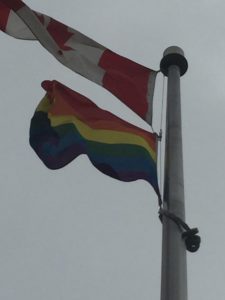 raised at Town Hall.  A ceremony was held Monday with representatives from the town and the local LGBTQ Community.  The raising of the Rainbow Flag coincides with Pride Month, an event to peacefully protest and raise awareness of issues facings the LGBTQ Community.

Antigonish Town Councillor Mary Farrell says the flag will fly with the Canadian Flag all of June.

Frazer welcomes the raising of the Rainbow Flag at Town Hall is another step forward. Frazer says the Rainbow Flag is a reminder the LGBTQ Community is here and active and good members of the community.