During a stop in Antigonish today, Liberal Leader Iain Rankin promised that if his party is re- 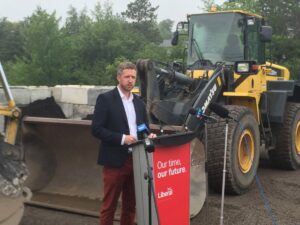 elected, it will apply for federal government funding to twin two more sections of Nova Scotia’s highways including one locally.

Rankin says Highway 104 to Port Hawkesbury and the most dangerous sections of Highway 103 to Bridgewater are the next twinning projects that will be prioritized by a Rankin Government.

The total cost of the two projects is estimated to be $237 million.  Rankin says the province will submit applications to the National Trade Corridors Fund which provides funding up to 50 percent of the project cost.

Rankin made the announcement with Liberal candidates Randy Delorey in Antigonish, Joe MacDonald in Pictou East and Lloyd Hines in Guysborough-Tracadie.