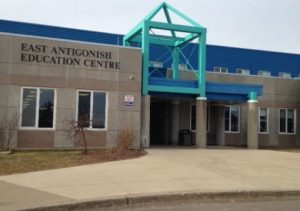 RCMP say officers were contacted Monday evening around 9 o’clock. Initial investigation has concluded the suspects painted the graffiti between 8 and 9 Monday night.

Police have also obtained video surveillance of the area. RCMP say the words painted on the school are both racially and culturally insensitive. Anyone with information on this incident is asked to contact the Antigonish RCMP.

Strait Regional School Board Superintendent Ford Rice says this incident is disappointing.
Rice says the focus at the school Tuesday included working with the RCMP with their investigation and removing or covering up the graffiti.

Rice says the focus at the school Tuesday included working with the RCMP with their investigation and removing or covering up the graffiti. This morning (Wednesday)  the School Board announced the school is closed.

Antigonish MLA Randy Delorey also issued a statement on the incident, condemning the vandalism. He also encouraged parents to take time to speak to their children about the impact bigotry and racism have on people who have been marginalized over generations. Delorey says racism will continue to exist unless we intentionally act to eliminate its causes. He says it requires all of us to put aside our differences, to acknowledge the existence of racism and its impacts and to work together to address and eliminate it.

The Indigenous Student Centre at St. FX University has been officially opened.  It will be known as Kiknu which means  “Our Home” in English. A ceremony to mark the opening was held at the Coady Institute’s Dennis Hall Friday afternoon. Fourth year student and Master of Ceremonies Jeneva Dennis says the centre is a place […]

With cases rising, including nine new cases today in the Central Zone, Premier Iain Rankin and Dr. Robert Strang, chief medical officer of health, announced today that tighter COVID-19 restrictions return tomorrow to parts of HRM and neighbouring areas. Starting at 8 am Saturday, new restrictions will be in effect in areas of HRM up […]

The St. FX Athletes of the Week come from hockey and basketball. The St. FX Female Athlete of the Week is X-Women Hockey Forward and Antigonish native Patty-Anne Tracey. Tracey, a fourth year Business student played a strong game in their recent 4-versus-4 game on Friday. Tracey has also been leading various community service initiatives […]