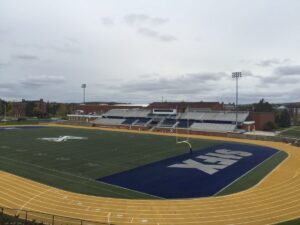 a 2nd year Arts student from Halifax, has been the most consistent player for the X-Women over their series of intra-squad games.

X-Men Soccer goalkeeper Seamus MacDonald was named the StFX Male Athlete of the Week. MacDonald, a 4th year Business student from Antigonish, NS had a stellar performance in goal for Team Blue in Sunday’s intra-squad game.

X-Ring Ceremony today, To be a Virtual Ceremony

It is an exciting day for senior students at St. FX University.  At a ceremony this afternoon, the students will receive their coveted class ring, also known as the X-Ring. This year’s X-Ring ceremony will be different because of the COVID-19 pandemic. It will be a virtual event, with only a small stage party, socially distanced at the Bloomfield […]

The lights will be turned on tonight for the first time on Nova Scotia’s annual holiday gift to Boston. There will be a virtual tree lighting this evening in Boston for the 45-foot White Spruce Christmas tree, donated by a local couple, Heather and Tony Sampson of Dundee. The tree was cut several weeks ago […]

The St. FX Athletes of the Week come from Basketball. X-Women Basketball guard Avery Walker is the St. FX Female Athlete of the Week. Walker, a first year Human Kinetics student from Ottawa, was second in team scoring and rebounding, and first in assists in the X-Women game of the week. She has been the […]