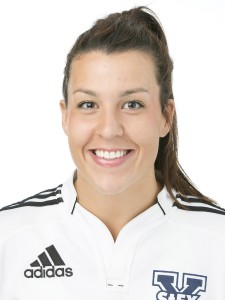 Emma Taylor, when she played for the St. FX Rugby X-Women

Taylor, who played five years at X, graduated in 2015, the same year she played her first game for Canada. She later moved to Ireland for three years, where she continued to play rugby, before moving back to Canada in 2019. Taylor rejoined the national program at that point and had a few tours before covid hit, and that put the brakes on things until last summer.

Trips to England, Wales, and the US followed, and then she took part in a national training camp in the Spring.

With the world cup coming up in October, Taylor has a busy few months ahead, including learning if she will make the final roster. With both World Cup taking place in New Zealand, Taylor said the Pacific 4 Series offered hint of that they can expect in the fall when it comes to things like adjusting to the time difference.

She also encouraged folks to come out to cheer on the team when they land in Canada later this summer.

The team will host Wales at the Halifax Wanderers grounds on August 27th.