X-Women Soccer forward Amanda Smith is the StFX Female Athlete of the Week. Smith, a 3rd 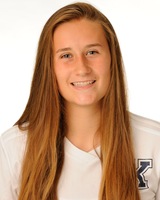 year Human Kinetics student from Ottawa, was on the scoresheet again with four fantastic goals in the X-Women’s game this past Sunday.