X-Women Soccer forward Hannah Yantha is the STFX Female Athlete of the Week. Yantha, a 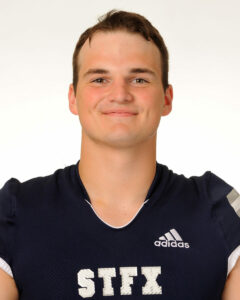 second year Human Kinetics student from Cambridge, Ont. was the Player of the Game in the X-Women’s 3-1 victory over UPEI on Sunday afternoon. She scored the game winning goal in the 63rd minute, and also made the key play to set up STFX’s first goal of the game.

X-Men running back Malcolm Bussey was named the StFX Football Offensive Player of the Week. Bussey, a second year Human Kinetics student from Hammonds Plains, NS scored the X-Men’s only touchdown of the game in a 24-10 win over Acadia on Saturday. His one-yard TD run came late in the 2nd quarter to give X a key 21-3 lead heading into halftime.

X-Men defensive lineman Alex Fedchun was named the StFX Football Defensive Player of the Week. Fedchun, a fifth year Human Kinetics student from Calgary, AB led the X-Men defense with 6.5 tackles in their 24-10 win over Acadia on Saturday.

X-Men linebacker Zach Taylor was named the StFX Football Special Teams Player of the Week. Taylor, a third year Human Kinetics student from Nanaimo, B.C. had great coverage on special teams in the X-Men’s 24-10 victory over Acadia on Saturday with two tackles while on special teams coverage.