St. FX University’s Cross Country Teams will be in Quebec City this weekend for the USports 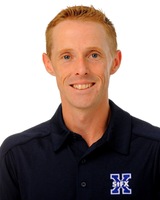 National Championships.  Races will be held Saturday on the Plains of Abraham.

Head Coach Eric Gillis says seven runners will compete from St. FX in both the men’s and women’s races.

Gillis says there will be a deep field of runners at nationals.

St. FX heads to nationals after a great result at the AUS championship in Moncton.  The X-Women  won the AUS banner at the championship, led by Siona  Chisholm, who crossed the finish line in first.  X-Men Cross Country was second in their race.