Over 200 students received their degrees during StFX’s fall convocation on Sunday afternoon. 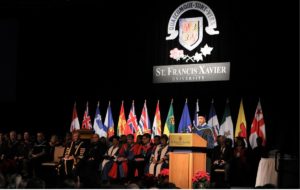 Dr. Helen Vari, a Canadian philanthropist and member of the Order of Canada, received an honorary degree.

Dr.  Vari,  the President of the George and Helen Vari Foundation, and lifelong supporter of education, academic research and the preservation of cultural heritage. Amongst her many honors, Vari is also a member of the Order of Canada.

Vari received an honorary degree from StFX during Sunday`s fall convocation. During her talk to the graduates, Vari said her husband was a student in Montreal in 1957 following the Hungarian revolution. StFX supported a Hungarian refugee fund, and sent a volunteer student with funds to offer refugees. That student was Brian Mulroney, who offered money and a winter coat to George Vari, who only had only a rain coat to wear in February.

In closing, Vari said she was touched by the degree. She thanked Canada and all Canadians, whom she called the best people in the world. Vari wished the graduates success and urged them not to forget their families, communities, or StFX.

StFX interim president Kevin Wamsley said the day not only marks the granting of degrees but also the culmination of the students` hard work and dedication.

Wamsley challenged the graduates to use their degrees and the knowledge they accrued during their time at StFX to take the more difficult path and build bridges between people to help solve the country’s problems. In closing, he congratulated the graduates and wished them all the best.