Local community theatre is making a return to Port Hawkesbury.  A new group has been 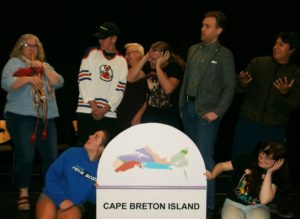 It follows the adventures of Dave Lawrence, a university student who learns through his summer job the value of his homeland from different viewpoints.
The script is written by well-known local actor Adam Cooke, who says the story is based on his own experience working in small visitor information centre in St. Peter’s in the summer of 1992.
Songs featured in the show include favourites from such artists as John Allan Cameron, Rita MacNeil, The Barra MacNeils, The Rankin Family. Leon Dubinsky, Stan Rogers, as well as several new compositions.
“One Thousand Welcomes” will be performed Saturday at the SAERC Auditorium , Sunday at the Port Hawkesbury Civic Centre Shannon Student, and returning to the SAERC Auditorium on Monday.  All shows are at 2 p.m.