One is Logan Chisholm, a forward who played five seasons with the Quebec Major Junior 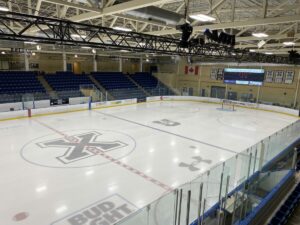 Also committing to the X-Men is forward Jake Stewart, who played four years with the QMJHL’s Moncton Wildcats and finished his junior career with the Maritime Junior Hockey League champion Summerside Western Capitals.

The third local recruit coming to the X-Men is defenceman Sean Stewart, who played most the season with the Maritime Junior Hockey League’s Pictou County Weeks Crushers, but also saw action with Drummondville and Rouyn-Noranda of QMJHL this season.

All three players were with the Cape Breton West Islanders when they won the Telus Cup in 2017.

The X-Men also announced two more commitments for the coming season; defenceman Mark Wooley, who captaied the Owen Sound Attack in the Ontario Hockey League this past season, and goaltender Lucas Pfiel, a backup at McGill last season who played three years of Junior with the OHL’s Kitchener Rangers and later with Cowichan in the British Columbia Hockey League