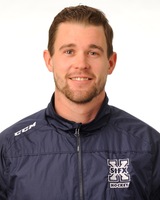 season with the ECHL’s Newfoundland Growlers, an affliate of the NHL’s Toronto Maple Leafs. Tremaine made his professional debut as a member of the Growlers last season, appearing in five games, and had one assist before the season was cut short because of COVID-19.

Tremaine joined the Growlers after completing his fifth season with the X-Men. He had 99 points in 146 games with the X-Men including 46 goals, leading his team to two AUS titles and a national bronze medal.