Police say at 7:40 Sunday morning, officers received a report of a break-in at a construction 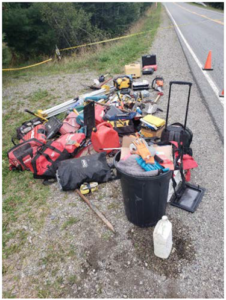 Police photo of some of the stolen items recovered

property on Highway 7.  During the break-in shortly before 6 a.m. that morning, police say two suspects were seen stealing a white Chevrolet Silverado pick-up truck and an enclosed trailer filled with tools.  Police say one suspect fled the property in the stolen truck towing the trailer and the other left in a red Ford Ranger pick-up truck.

Later that morning, Pictou County District RCMP found the stolen pick-up and the Ford Ranger travelling at a high rate of speed on Highway 327 in McPhersons Mills.  The Ford Ranger went off the road, spilling a number of tools.  Some of the tools struck the police cruiser, resulting in significant damage.  The police officer wasn’t hurt.  The driver of the pick-up was taken to hospital for treatment of serious, but non-life-threatening injuries. The stolen pick-up and trailer were both recovered.

30-year-old Arthur William Cross of Pictou Landing and 36-year-old Steven Matthew Wilson on Trenton both face charges of Possession of Property Obtained by Crime and Failure to Comply with Conditions of a Release Order.  Cross is also charged with Dangerous Operation of a Conveyance Causing Bodily Harm and Driving While Prohibited.

Wilson appeared in Antigonish Provincial Court Tuesday,  released on conditions and will return to court on October 12th.  Cross was remanded into custody and is due to appear in Pictou Provincial Court today.